This is such a life saver in the summer as someone with combination/oily skin. On particularly hot days I bring this in my handbag so that I can retouch my face on the go. If you like a matte look then this is what you need!

Really controls the oil on your t-zone. A little bit white in the skin but you can cover with bronzer.

I have dry skin and a lot of undereye lines, so it was always difficult for me to find a powder that i would love to set my concealer with. I've tried Laura Mercier, Fenty Beauty, drugstore powders but everything made my undereyes look so dry and cakey. Until I found this powder. I've never loved a powder so much! It's blurring, very light weight and doesn't look dry. Amazing for everyone with dry skin that is too afraid to use powder.

This powder doesn’t feels or look like powder when applied. It feels very natural and removes shine from the skin effectively. Can’t wait summer to test this product during the hot season.

This is an amazing product! I tend to have a subtle glow after spending a long time in front of lights and a very small amount of this product and my face stayed mate through my whole working day.

I just love this powder!!! It’s so finely milled and it really helps keeping my T-zone oil free. It actually makes my whole makeup long lasting. I have tried pretty much every mattifying powder out there and I prefer this one over bestsellers by luxury brands! Just try it and see for yourself!! 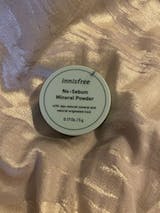 Can’t live without it anymore!!

Ok so this stuff is no joke when it claims shine free!! Omg. Normally my face is greasy as hell but one swipe of this stuff had me matte as a baby’s skin!! No gloss or shine whatsoever. In fact, it was so abnormal that it took me a second to get used to looking at myself w out my normal “glow”. It’s a great product barring that I don’t get any breakouts from prolonged used. Very happy w this product.

I LOOOOVE!! I've been using this product since late September and early February now, I still have it and I still love it. I initially used it under my makeup as a part of the prepping process to keep my wonderous oils at bay, that decision was partly based on another's review saying it'll be ashy on darker skin tones. Now that I've tried it to set my full face, I feel that I've debunked a myth works perfectly. I also can't tell which way is better I suppose that'll be based on preference, also a little goes a long way its a great product in every mineral that is comprised of its makeup. So glad to have it, if you're on the fence I hope I was able to confirm your judgment.

12
Versand
Shipping information
Korean-Skincare delivers your package quickly, safely and 6 days a week from our warehouse*. We ship every day from Monday through Friday. Ordered before 09:00, and we will delivery your package the same day! Please note that for DHL deliveries, the tracking code starts working around 14:00~16:00 and deliveries are usually planned between 17:00 and 21:00.
*We do our utmost to deliver your package as soon as possible. In some cases it may be possible that your delivery has been delayed due to circumstances. You can always follow your order through your personal Link. There you can follow your product so that you know exactly when you will receive it!
Shipping costs
The Netherlands: € 3.95Free shipping in the Netherlands on orders over € 40 Belgium and Germany: € 5.95Free shipping in Belgium and Germany on orders over € 40
EU
EU zone 1:

Ask the Expert anything on Korean Skincare

We will try and get back to you as soon as possible
Please answer the following questionnaire
Product has been added to your wishlist.
You can view your wishlist by creating or login account.
Please create account through ##customer_email## email
Login Register
×
Welcome Newcomer
English Dutch Deutsch French
Deutsch